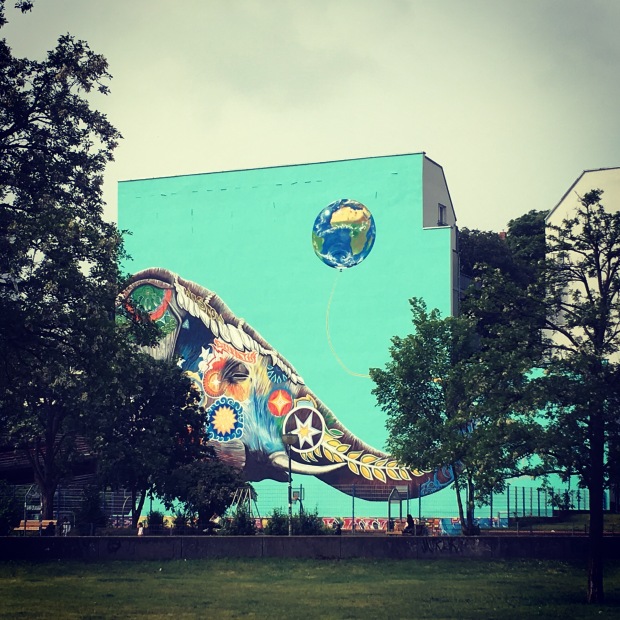 You no longer have to be in a gallery to see incredible art, neither know about everything from the Renaissance to Pop Art to be deemed an art critic. The great thing about street art is that there is no arrow pointing to where you should look, or a piece of card explaining the artist, name of the work and the materials that were used. You have to look and find these things yourself; an art treasure hunt, if you will.

London is well-known for its street art and graffiti; it’s clear you’ve entered the hipster hub of Shoreditch when you start to see quirky drawings on the side of buildings, and provocative words sprayed onto breeze-block walls.

Berlin, however, takes the whole street art phenomenon to new levels. The sheer quantity of stunning designs on every street corner is obvious as soon as you get off the train at the main station. It somehow makes the city seem instantly more laid back, and gives you the sense that the graffiti police are not so fussed about stray spray cans in Germany.

Like a lot of outdoor ‘art’, a fair amount of Berlin’s arguable vandalism is just that – I’m not pretending that every wall is adorned with next year’s Banksy – but there is an awful lot of impressive stuff out there.

For the ultimate experience of wall art, the East Side Gallery is a no-brainer. This is a remaining part of the Berlin Wall which is still standing, a harsh reminder of the former divided city. However, in contrast to its previous life as a grey, stark symbol of the partition between East and West Berlin, the wall here is now a giant canvas. This is the biggest, most impressive, varied mural you have seen. 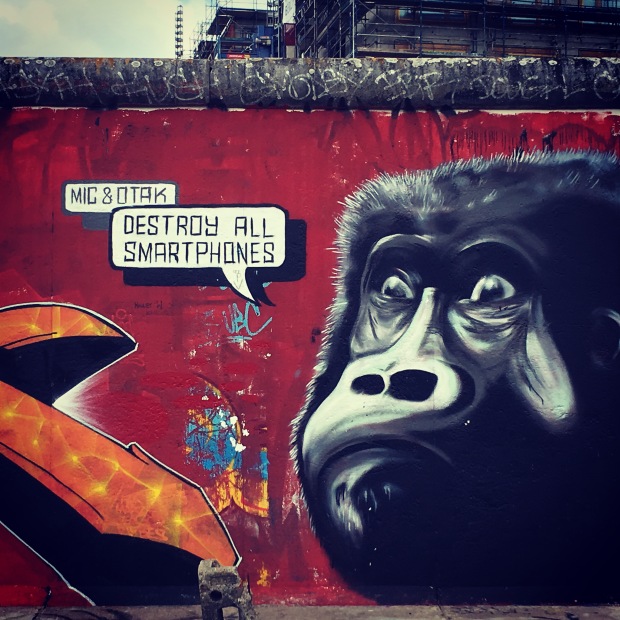 Interspersed with messages about climate change and thought-provoking statements are reactions to the fall of the wall, and the union of the country. Pictures evoking the persecution of the prior years alongside the promise of newfound freedom distil the 1989 Berlin Wall collapse into hard-hitting realities.

For incredible art as well as an education about what divided Berlin meant for society, forget the traditional galleries and museums. This art experience is completely free: it is street art as you’ve never seen it before.

January, they say, is a depressing month. Christmas is over, money is tight and strict regimes are being imposed to tackle the festive overindulgence. Personally, I am taking the ‘Dry January’ message to mean that this month, my alcohol choices will be mainly Dry Gin. The ‘clean-eating’ trend the masses are adhering to this year also seems to me, quite sensible – if dinner is eaten in the bath, chance of inevitable spillages on clothes is eliminated. This is what they call a win win situation.

But having got used to the lights, sparkles and decorations, London looks fairly naked. Christmas away from the capital begins as a novelty, and then you realise that actually, being able to get a pint of milk in two minutes, have decent coffee on every street corner, and not be affected by insane amounts flooding is pretty appealing. In line with the depressing fact that is the rise in travel fares, a bleak sense of ‘back to work’ reverberates in the tube carriages –  the only vague source of consolation is the fact that Tottenham Court Road station is finally open (it’s the small things people).

And to top it all off, two of the country’s most talented stars sadly passed away this week: David Bowie and Alan Rickman, both at 69, sadly lost their battles to cancer. This just may be the icing on the cake, the thing to tip those already struggling with the new gym routine, the lack of alcohol, and the utterly depressing weather, completely over the edge. No wine, no sun and now THIS?  The reaction to Alan Rickman’s and particularly David Bowie’s deaths  has been phenomenal, especially in the capital: perhaps because Bowie was a Londoner through and through; perhaps because he made such an impact on music; probably, too because Bowie showed that to stray from convention and to define yourself as an individual was not only possible, but admirable and inspirational. I had the pleasure of visiting the V&A’s ‘David Bowie Is’ exhibition a few years back, and to this day I think it is one of the best museum exhibitions I’ve seen.  Not only did I see the epic Ziggy Stardust bodysuit, on show were also handwritten lyrics and even Bowie’s diary entries, offering a snapshot into the innermost thoughts of the superstar. It was clear from ‘David Bowie Is’ that there isn’t a great deal that David Bowie Isn’t , or, now, that David Bowie Wasn’t.

On Monday, Brixton, where David was born, was awash with fans who wanted to show their respects to the Starman. An area which (for now, at least) exists as an un-gentrified hub of culture and colour that still maintains a sense of the ‘real London’ was suddenly centre stage and thriving. Indeed, the star and his achievements are very much tied up with his life in the city: there is even rumour of the fourth plinth being dedicated to Bowie. We can but hope…

Not only Londoners, but the world, were and still are, devastated. Having heard the news, I couldn’t help bring it up when I met a friend at London’s Barbican Centre.

‘Aren’t you really upset about Bowie?’ I asked her, ‘I can’t believe he’s died!’

‘Not really’, she answered. ‘I never knew the man. He’s died, but my life’s not changed. I can still admire him, enjoy his music… What’s the point of wasting time being upset about someone we didn’t know – we should be celebrating him, and just continuing to listen to his songs’.

I have to say, these are words of wisdom: our lives are none the poorer for having lost an icon like Bowie. Of course when someone loses their life, especially to cancer, it is no doubt an intensely sad event: but shouldn’t we just be grateful that Bowie made his music in the first place? The fact that we all have the benefit of being able to listen to his songs, enjoy his films, just as before, should be at the forefront. The world may have lost a London born superstar, but this is not cause for tears: this is time to say ‘Let’s Dance’. 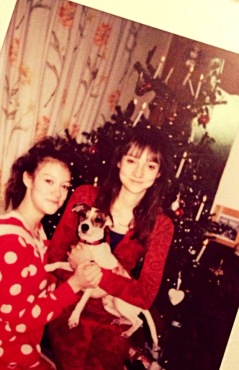 London has definitely jumped on the ‘more is more’ bandwagon with their festive decorations this year. I think that means I should too.

Style is not just about what you wear: interior design and home décor navigate through trends just as fashion does. Just as some people may be queuing up outside Topshop to get the latest winter coat, others may be on the edge of their chair, ordering the new season’s curtains online. But when it comes to Christmas, is stylish superior? Or should we all just accept that festive decorations are meant to be gaudy and garish, and when it comes to tinsel, more really is more?

The tradition of decorating the tree, or even adorning the house with all manner of sparkly things in December is a much anticipated event in my family. Indeed it seems like most of the country get excited at the prospect of cracking out the Christmas decs, having to buy new fairy lights (because they inevitably break every year), and admiring the wealth of festive ornaments on sale this time around.

I know people that choose a different colour scheme each Christmas: gold and green last year, purple and silver this time, perhaps a red and white affair in 2016? Of course some individuals see decorating just as they see fashion, trawling through home décor magazines to find the newest way to jazz up the tree, or the latest colour scheme that the celebs are going for. Not only does this entail forking out a fair amount of dosh for new baubles, lights and ornaments each year (let’s face it, these sort of people are not ones to get their Christmas goods from Tesco), but it means discounting and forgetting the mountain of decorations that may have been bought last year, or the year before, or the year before that….

For me, part of the fun about decorating for Christmas, and bringing the battered bauble boxes down from the attic each year, is rediscovering various things we have collected: the peg doll angel I’d made when in playgroup, the straw snowflake I won in a German quiz in secondary school, the ice-skating bauble I carefully chose at the garden centre last year. Each December, we have had a tradition of each getting a new decoration, meaning that every year our decoration box gets fuller and fuller, and every time we open it, we have more and more memories to add. Consequently, our tree is never co-ordinated or colour-schemed; never minimalist or chic – it is a huge multi-coloured amalgamation of various glittery baubles, flickering fairy lights, and prehistoric homemade ‘things’. But it is marvellous this way: our tree is a 3D memory trigger. A reminder of all the Christmases we have shared together, and ultimately, something that makes us happy.

It may not be the most stylish tree in town, or the most matchy-matchy spectacle on the street, but I would much rather have all-out, if a little garish, but incredibly meaningful Christmas decorations, and I think many would agree. If you can’t break style rules once a year, when can you? I think on this occasion, crimes against fashion are completely legal.